I just made a cup of tea and I’m ready to talk about my health changes.  It’s a hard subject for me but maybe my experiences will be helpful to you.  So pour your tea, and relax.

Up until menopause, my health was good with no problems.  I worked out, sometimes, walked a lot, climbed stairs with ease, and felt good even though I was somewhat overweight since the birth of my son.  I always had great blood pressure, could move well, and had a very flexible body.  But, boy did that change.

Several years ago, I spent the weekend outdoors, selling my handmade  jewelry at a craft show. It was very damp and chilly weather and I developed what I thought was lower back pain that had a constant ache.  Over time, it hurt too much to straighten up and without realizing it, I started to walk with a slight bend.  My doctor sent me for injections which helped but didn’t address the cause.  I still was thinking that it was my back so figured the injections were appropriate, but it got  worse and started giving me pain in the right groin muscle as well.  I’ve since learned that hip problems will cause this groin pain.  But anyway, after searching for the cause, I finally found out that it was arthritis in my right hip and most likely would get progressively worse.  It also dawned on me that my walking was not going to improve and I started using my father’s old cane which had been stored in the basement.

Beginning to use this cane was very traumatic for me.  I felt “old” for the first time and terribly unfeminine.  It was a great help but I hated it.  Do you have any idea how hard it is to juggle everything we have to carry with only one free hand?  And what do you do with the damn thing when you need two hands?  It was terrible.  But I slowly worked that all out, walked as straight and tall as I could, and made up my mind that I wouldn’t be defined by that cane.  I also didn’t want to look like an old lady victim when I walked alone so worked really hard to develop a confident stroll and swagger.  I’ve gotten to the point where I do everything with the cane that I did without it, and try not to hate it too much.  Mine is filled with nicks and dings because I drop it all the time but I don’t care.  I even take it on the beach and have gone in the ocean with it too.  I’ll be darned if I’m going to stop going to the beach.  And, my girlfriend and I have found a beach with a small stretch of sand, outdoor shower, bathroom, and snack bar, so I’m good.  A bigger problem is how I look in a bathing suit but that’s a story for another time.

One thing I have learned is that there are lots, and lots, and lots, of people who walk worse than I do, and they don’t use a cane.  I want to grab them and tell them, “get a cane” but you can see that they have learned to walk without it, however awkwardly they must move, and like it was for me, they haven’t even thought about using a cane.  That was my problem.  I had absolutely no thoughts about needing a cane at first and by the time I did, I was already doing that funny penguin walk myself and ruined my posture with scoliosis, which wasn’t present before.  So, if you are one of these people, please take heed.  I ruined my spine by waiting too long to start with the cane so don’t make that mistake.  If you need it, use it.

So, fast forward to the hip replacement.  After a few years of this, I decided I was going to need hip replacement.  Again, I waited too long to have it done, though this time it was for financial reasons and not wanting to lose a new job.  But anyway, I had gotten to the point where my thigh bone felt like it was sliding back and forth into the hip socket, and it was a feeling I can’t begin to describe.  It even began to make noise when I walked so I scheduled the surgery.    Here’s the run down on that.

My son took me and waited for hours while they did the replacement.  I woke up during the procedure and heard them hammering something.  “Oh God, is that me?” I thought.  It was.  But eventually I woke up, in no pain, and saw my son smiling at me.  They rolled me off to ICU after recovery and settled me in the bed.  Still no pain.  BUT, when the nurse came to change the sheets or do the bedpan or something, they rolled me over and I screamed because for a brief minute, the pain was so intense that I thought I would pass out.  But, I’ll be honest, that was the only pain I had.  And it ended as quickly as it started.  But let me backtrack a minute.  After the surgery, they place a foam wedge between your legs and strap it to you so you can’t cross your legs or move.  That was torture for me because I get claustrophobia if my legs are trapped, like having the blanket pulled so tight you can’t move.  So there I was, trying not to hyperventilate because my legs were trapped!  Somehow I got through the night and convinced them to loosen the straps and give me some freedom and by morning, I just had the wedge, no straps.  Yay!  But then the next torture began.  The physical therapist got me up and gave me a walker and said, “walk”.  And, I did.  Who would have thought that I could?  But I did and made it all the way around the circle of ICU.  And that started my two week stay in the hospital, with physical therapy twice a day, decent food, no one to bother me (other than nurses etc checking things) and it almost felt like a vacation.  Oh, and one thing I forgot to mention, when they were hammering the rod into my thigh bone, they fractured it so I had this humongous brace I had to wear outside my clothes for 6 weeks to hinder my range of motion in order for it to heal.  So I had that hanging off of me during all of my physical therapy.  I think the worst part was not being able to wash my hair for two weeks but I survived that  by not looking in the mirror much! All went well and in two weeks, I went home, wearing the brace for another 4 weeks.

Now fast forward again, and three years later, my prosthesis starts to squeak and gets louder and louder.  Picture that in the library!  So back to the doctor I go and this time there is a  new specialist who I immediately trust and he explains that the first prosthesis was not put in exactly straight and I was starting to dislocate it.  What!!????  So back I go to have the hip replacement replaced.  This time they cut me loose in a couple of days because I was in such good shape that I could do all the physical therapy with ease (I busted butt the first time to do it well so was in good shape from that) and I came home to heal again.

BUT, two weeks after the surgery, I started to get out of the chair and felt something inside sort of slide.  “What’s that, I think.”  Well, I found out a couple of days later when it happened again and all of a sudden, I felt the worse pain I’ve ever felt, in that same damn hip, and luckily my son was with me and called the ambulance.  I couldn’t get out of the chair when they came and it almost took a crane to lift me onto the gurney.  But I got to the ER and found out I had dislocated that hip.. I was begging for drugs, that’s how bad it hurt, and they finally gave me drugs, put me out, and popped that sucker back in, and then sent me home.  I was told that they had to stand over me and pull up to put it back but I’m not sure that’s true, and sort of don’t want to know, but whatever they did made the rest of my lower body worse, but more about that another time.  Anyway, I went home,  afraid to move, so I sat in the chair almost two months, getting up only when I had to, and let my hip heal where it was supposed to.  Apparently, when the first one was put in, it was put in crookedly and so when the second one went in, the surgeon tried to straighten it around the scar tissue that had formed, and I was his only patient to ever dislocate.  Great…….  But, I still trust him and want him to do my knee, which is next.

So, enough of this for now.  I’m tired of talking about my stupid body, my tea is finished and I’m dry mouthed from talking so much.  So, until next time, enjoy your tea and your book.  We’ll talk again soon. 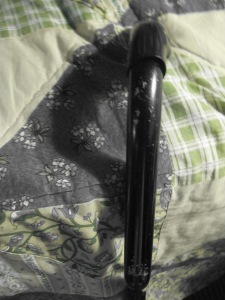